We Belong to the Light Sermon by Father Keith Johnson We belong to the light We belong to the thunder We belong to the sound of the words We've both fallen under Whatever we deny or embrace For worse or for better We belong, we belong We belong together
---- We Belong, sung by Pat Benatar
This all started with a trip out to the store for ice cream.  It was Saturday and I went to get ice cream for my wife and me.  I was preparing for my sermon, and something was missing, so I stopped and decided that I needed a break.  I was studying the Gospel of Luke 7:36-50, the story of the Woman with the Alabaster Jar.  I'll give you the recap; a woman, who is a sinner, crashes a dinner held for Jesus, by the Pharisees, starts to anoint Jesus' feet with ointment, and her tears.  Jesus then tells the snobby Pharisee, Simon that the woman treated Jesus better than Simon did, and tells the woman that her sins were forgiven.  It is a powerful story, but if you read further there was another point that Luke was trying to make. In the Episcopal Church we use a Lectionary, or calendar of Bible passages that are to be read in church on any given day. Our lectionary only required us to read Luke 7:36-50, but I read through Luke 8:1-3 and what I found was remarkable. Now a few people have wondered who the woman was with the Alabaster Jar, because she is not named.  Women Theologians have pointed to this passage as a patriarchal society eliminating the voices of women.  I found this to very interesting considering that Luke writes in the first chapter of his Gospel; "therefore since I have carefully  investigated everything from the beginning it seemed good also to me to write an orderly account for you..."  Some of you are saying  "No big deal women didn’t count back then so he didn't bother to know who she was."  Normally I would believe that until I re-read verses 8:1-3: 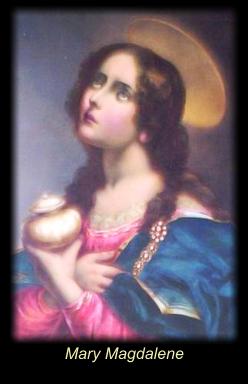 Soon afterwards he went on through cities and villages, proclaiming and bringing the good news of the kingdom of God. The twelve were with him, as well as some women who had been cured of evil spirits and infirmities: Mary, called Magdalene, from whom seven demons had gone out, and Joanna, the wife of Herod's steward Chuza, and Susanna, and many others, who provided for them out of their resources. How could I have missed this passage?  Then I realized that this passage is between the "Woman with the Alabaster Jar" and the "Parable of the Sower."  So in between these two wonderful stories we hear of three women, named  by Luke as followers of Jesus.  We also find out that Joanna was the wife of Herod's steward. The job of the king's steward is public, and powerful, yet his wife was a very public follower of Jesus. This also tells us that Jesus' message reached more people than we thought and it also tells us that Jesus was far more dangerous than generally believed.  If Herod’s stewards wife was a faithful follower, then how many other high born people believed the message that Christ was preaching?  These women supported his ministry and traveled with the twelve.  Luke didn't name the disciples, their names weren't important, but the names of the women were important to him.  These names and the placement of them in the Gospel tell a fuller, richer story, than what we have been traditionally told.   I can hear Joanna, Susanna, and Mary Magdalene sing the above lyrics to the men at night.  I know that I am mixing my centuries and cultures, but this song fits: "We belong to the light, we belong to the thunder, we belong to the sound of the words that we've fallen under.  We belong, we belong together."

We all belong together, all of us!   That has been Christ's message from the beginning and will continue to be the message for all of time.  Wouldn't it be great if we actually believed it?

.  This site is navigable for the seeing impaired.  Contact web mistress Kythera Ann with comments or questions.